skip to main | skip to sidebar

Cake #1 of my Cake Challenge

I decided since I got a new cookbook via the internet thanks to Kindle...
I am going to try to bake every cake, cookie, bar and dessert in the book!

First up, Cinnamon Filled Pudding Cake!
Thanks to GOOSE BERRY PATCH this should be the first of many! 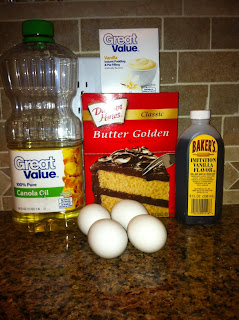 Mix First 5 ingredients in a bowl.
Blend one egg at a time.

In a separate bowl mix cinnamon and sugar.

Mix until smooth and creamy.
Drizzle over cake.

Jaime
I heart a good book, I heart scented candles, I heart the beach, I heart sleeping in on a crisp fall morning, I heart makeup, I heart coffee (iced or hot!) Born and raised at the Jersey Shore, but I don't pump my fists! My name is Jaime, I am a wife, sister, daughter and mommy to a dog named Boomer. This is my attempt at a blog to show off my trial and errors in crafting and furniture make overs. Sit back, relax and stay awhile!